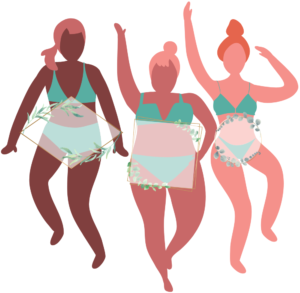 Here is a list of common surgical incisions in the abdomen for female sterilization surgery or other surgeries. Please note that some of these incisions are not for simple sterilization procedures where just the fallopian tubes are removed or cut. Some of these are in combination with a cesarean section or for the purpose of a hysterectomy.

This list is a broad sketch of the incision options. Since all bodies are different, the doctor will have to make the choice on where exactly to cut. Your doctor will probably suggest this, but it’s a good idea to first discuss this with your doctor before you proceed. It’s common to lie down on an examination table and expose your lower belly. Then, the doctor can do an echo and look at your tubes, ovaries, and uterus, and point approximately where the incisions will be.

SterilizationAunty organized these incisions from small to big. Know that a doctor might have to combine multiple incisions to perform sterilization surgery. The general rule is: the smaller the incision, the less invasive the procedure. Less-invasive procedures make your recovery time shorter.

You don’t need to learn the sometimes difficult names of these incisions to talk to your doctor. This is just to inform you about the different types of surgical incisions there are and where your scars will be.

Surgical incisions through or near the navel (belly button)

For laparoscopic surgery, it’s common to use the navel or belly button. In Latin, it’s called the umbilicus. Your navel is a scar you’ve had since your own birth. By using this scar to insert instruments, the doctor has lots of space to work with. The scar you’re left with is likely small or invisible. But because the navel is a warm, humid, and dark place that’s difficult to clean, the incision site is more prone to bacterial infections.

There are some operations that a surgeon can accomplish with a single incision through the navel. Some call it Single Incision Laparoscopic Surgery (SILS). The surgical team does this by placing a port that allows the surgeon to use multiple instruments at once. However, this requires a lot of specialized skills from your surgeon. If your surgeon knows how to do it, they’ll probably suggest it when discussing the procedure. 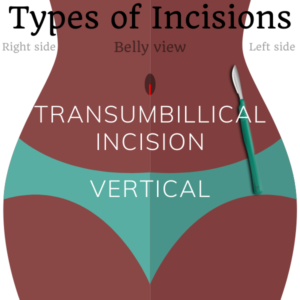 This incision is inside the navel. For many laparoscopic surgeries including sterilization, the surgeon uses this cut to put in his laparoscope. The laparoscope pumps gas inside the abdominal cavity, which allows the doctor to see inside you with a built-in light and camera.

After the surgery, the surgeon stitches your navel back up as much as it looked before the incision. If you have an ‘innie’ belly button, there’s a good chance the scar falls inside and won’t be visible at all. 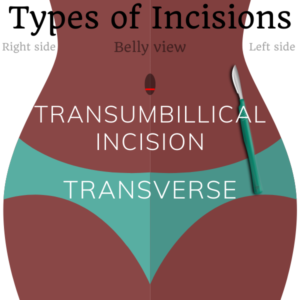 This is similar to other transumbilical incision, but the incision is horizontal (transverse) instead of vertical.

This choice might lie in the shape of your navel, preference of your surgeon, or have another reason. Chances are you won’t even know which incision you got without asking your doctor because it will probably be invisible. 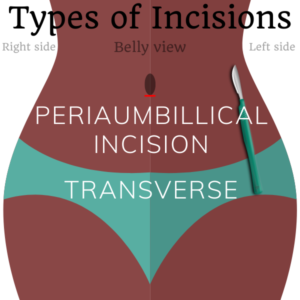 This surgical incision falls right below the navel and not inside it. This means there will be a visible scar for at least a while after the surgery. Over time, it may become invisible.

The advantage of going outside the navel is that it minimizes your chances of developing a bacterial infection.

Surgical incisions near the pelvis, below the bikini line

The following incisions are away from the navel and closer to the pelvic bones and/or the pubic bone. In terms of sterilization surgery, this is where the surgeon puts the tools for action. Combined with an incision through the navel, your surgeon will have plenty of angles and room to work with.

What is nice about these incisions is that they generally fall below your panty line. Once you’re allowed to go swimming again after surgery, your surgical incision might fall below your bikini line. This way, you can enjoy post-operative life without feeling self-conscious about your scars. 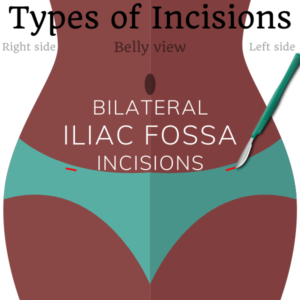 The iliac fossa bone is a part of your pelvis near your hips. When undergoing a bilateral salpingectomy or bilateral tubal ligation, this is usually where the tools to grab and cut your fallopian tubes go. Another name of this incision is the Lanz incision, but usually shorter in length.

The big advantage of one or two small incisions is that they don’t weaken your abdomen that much. The smaller the incision, the better it can heal. 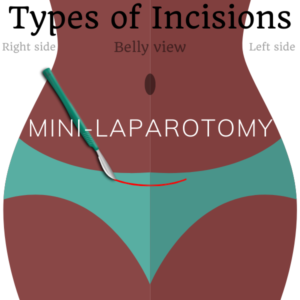 As you might notice, the surgical incisions are getting bigger now. This is also commonly known as ‘open surgery’ as opposed to ‘minimally invasive surgery’. This diagram shows the approximate size of a mini-laparotomy.

The term ‘mini-laparotomy’ is not the word doctors use for this type of incision. Doctors would say this is a short Pfannenstiel incision, which is below the bikini line and slightly curved. But it’s the most popular phrasing by those who have been sterilized with this incision and write about it on the internet. The word ‘laparotomy’ refers to all abdominal surgical incisions.

During a mini-laparotomy, the surgeon first makes this incision. Then, they pull out the fallopian tubes to cut them, before placing it all back and closing the incision.

A surgeon can also perform a hysterectomy through a mini-laparotomy.

After the vaginal delivery of a child, a surgeon can also perform this sterilization procedure when you’re at the hospital anyway. 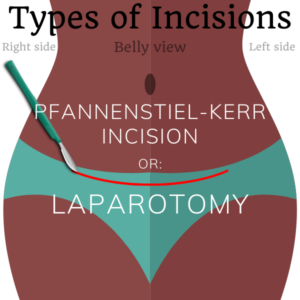 This large abdominal incision can be used for sterilization, it’s also large enough to deliver a child by cesarean section. It’s also used for hysterectomies.

Like its smaller counterpart, the Pfannenstiel incision is slightly curved on your body.

Incisions above the panty line

The following incisions are quite large and are usually above the panty or bikini line. These surgical incisions are unnecessarily big and visible for just a tubal ligation or salpingectomy. Your surgeon should probably not suggest these incisions for fallopian tube removal

Associated with the cesarean section and hysterectomy, these incisions give the surgeon a lot of direct visibility and room to operate. It’s open surgery and quite invasive, so the recovery time is longer. 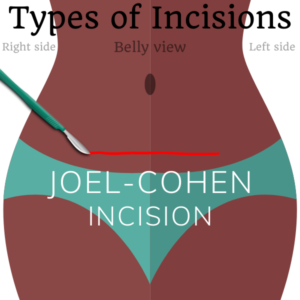 This incision is straight and right above the panty line. It’s more visible than any of the other incisions mentioned previously.

The Joel-Cohen incision is large enough for a cesarean section. The surgeon could also perform a hysterectomy with this incision.

Commonly, a surgeon can use this incision to perform female sterilization surgery right after a cesarean section. Make sure to discuss your decision to sterilize at the cesarean delivery of a child with your doctor, preferably in advance, and while not in pain or under the influence of medication. 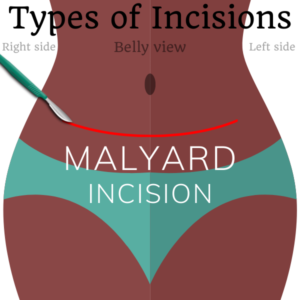 The Malyard incision is even higher on the tummy than the previous incisions. Unlike the Joel-Cohen but very much like the Pfannenstiel, it’s bendy. It’s about the same length as a Pfannenstiel, too.

Commonly, a surgeon can use this incision to perform female sterilization surgery right after a cesarean section. Make sure to discuss your decision to sterilize at the cesarean delivery of a child with your doctor, preferably in advance, and while not in pain or under the influence of medication. 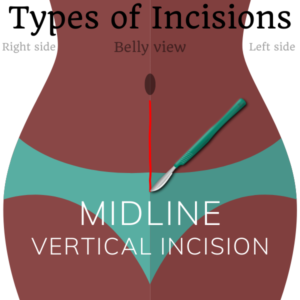 This one seems to be rare for sterilization and cesarean section, but not uncommon for hysterectomies.

A midline incision can be made anywhere along the middle of the abdomen. In the case of a hysterectomy, it’s usually good enough to make an incision from below the navel to slightly below the bikini line.